Veterans gather at the Historical Museum for the Korean War installation 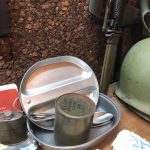 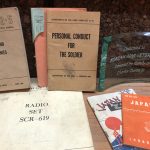 The Macon County Historical Museum on Main Street in Franklin, housed in a former general store from the turn of the 20th century, includes exhibits from all American periods as well as installations focusing on the Great Wars. It does, however, lack an exhibit on the Korean War, which many people refer to as the “forgotten war.”

On February 8, four local Vietnam veterans lent their support to the “opening” of a Korean War exhibit that Johnny Curtis, one of their veteran “brothers,” organized and donated. The behind-the-glass exhibit is the product of extensive research in the service of Curtis’ uncle, Floyd Moffitt, and his own father, Charles Curtis Jr. Both men fought in the Korean War and Moffitt was killed then which he served. “In fact,” Curtis said, “he was one of the first Macon County men to be killed in the Korean War.”

Curtis’ father survived the war but never talked about it. Curtis, who served 10 years in the Air Force, including the Vietnam War, had to delve into the two men’s involvement in the war by piecing together information, mostly found in photographs, found in the possession of his family. In fact, family photographs, as well as copies of photographs from public archives, are part of the exhibit of the Historical Museum. Through his research, Curtis also discovered the uniforms, equipment, and various other related military items that soldiers like his uncle and father wore and wore, and Curtis was able to acquire several items for museum display. What touched him the most were the photographs showing the extreme cold the soldiers endured. The average temperature in Korea during the winter months is at or below zero. “And some of the photos show them walking through the snow,” he said.

An etched glass plate that reads “Dedicated to Korean War Veterans; Donated by the family of Charles Curtis Jr.,” is displayed amidst a collage of photographs in the background and alongside 70-year-old items such as a “Personal Conduct for a Soldier” booklet, a mess kit , headphones, etc.

Curtis is a member of American Legion Local 108 in Franklin. Because the Korean War exhibit honors soldiers who served, a few of Curtis’ veterans and friends in Vietnam participated in the museum’s installation as a show of support. Also in attendance was veteran Sherry Newton representing the American Legion as the historian for post 108.

After the Korean War installation, the five veterans — four of whom are Franklin natives — gathered on the third floor of the museum. There, Curtis along with Rick Norton, Rick Stough, Ron Norton, and Gary Shields discussed why preserving and promoting historic events is so important.

Shields, who served two tours of duty in Vietnam, is a Macon County commissioner and retired educator. He was principal of Franklin High School for 21 years and noted that veterans often spoke to students and shared the historical significance of the war. “A superior told me when I finished my service in Vietnam: ‘You have served your country; now go home and serve your community. And the best way to do that is through education.

“People just don’t know much about the Korean War. [which lasted from June 1950 to July 1953] because it was much shorter than the Vietnam War [November 1955 to April 1975] and so many fewer soldiers died,” said Rick Norton, who toured Vietnam. “But it happened, and some of our fathers and relatives fought there and we must not let this be the ‘forgotten war’. No history should be forgotten. This Korean War exhibit helps educate. Unfortunately , students are getting less and less education in schools about this story and about most stories.

Shields explained that ten percent of Macon County’s population is made up of Vietnam veterans. Ron Norton, who toured Vietnam, joked that the “senior trip” for Franklin High School Men’s Class of 1967 was a trip to Vietnam. Two of the class were killed in the war and six in total from Macon County. Their photographs and names are on a wall at Vietnam Veterans of America, Chapter 994, located at 249 Sloan Road in Franklin.

Norton added: “We had no idea what we were getting into. Some of us had heard stories of fathers or parents who fought in the Korean War or World War II, but many never spoke of their experiences there. When I got off the plane in Da Nang [the largest city in central Vietnam]I had to run to the bunker because the airport was bombed.

Ron Norton saw fierce combat in the Vietnam War and brought home a Chinese bayonet, which he kept for 30 years before donating it to the Vietnam War exhibit at the County Historical Museum. Mason.

All of the veterans in attendance on Feb. 8 recounted experiencing or witnessing protests and animosity upon their return from the war — in towns and cities outside of Franklin.

“Franklin and the community have been so supportive of us vets,” Norton said.

Others present agreed that the residents of Macon County appreciated the service of the soldiers.

But in pockets across America at the time, mostly in major cities, protesters demonstrated their objections by spitting on soldiers, insulting them and calling them “baby killers” due to reports making state of civilian casualties in Vietnam, and by burning the American flag.

While serving as a soldier in Vietnam, Shields quickly learned that a logistics chart showing who had died and what positions and areas were needed – based on skills, etc. – often strategically determined where soldiers were placed in Vietnam. “Sobering…just like having to go to ‘jungle school’ for two weeks. And I left the war when my tours were over, but the war didn’t leave me.

“I was involved in constant fighting,” Ron said, “but whenever we could we gave civilians food and other supplies, but it wasn’t reported to the Americans. Just the bad things. War is terrible. No one hates war more than someone who has seen it.

Rick Norton and the others have lost friends and comrades in arms. They all experienced the trauma of war differently. Norton decided to visit Vietnam in 2018 and again in 2019. What he experienced was a modernized and prosperous country with people who welcomed him wherever he went.

“I made new friends and realized that it wasn’t for nothing. I needed to go there for myself and let go of some of the grudges I had built up in my mind during that time of the war. I buried a bunch of demons going there.

“I had a friend who returned to Vietnam a year ago and he told me that everything was built, with hotels and golf courses. But the little outpost I helped defend, called Monkey Mountain, is still there and preserved.

Stough said he had to stand still in the jungle surrounding the outpost.

“It was pitch dark and we didn’t have night vision goggles on at the time.”

Focus on the positives

Rick Norton said that befriending Vietnamese when he visited the country a few years ago, bonding with other veterans and supporting each other are all positive results of a terrible war. He noted that what started locally as a $500 veterans scholarship fund in 2012 to benefit future generations of veterans in Macon, Swain and Jackson counties has grown to $150,000. in scholarships.

According to Ron Norton, “This scholarship fund and museum exhibits are ways to let the community know that veterans are still around – and they have a camaraderie and are very involved in the community in different ways. Two of my grandchildren received some of the scholarship money, and it helps them to know that there were wars and that their grandfather actually fought in one of them.